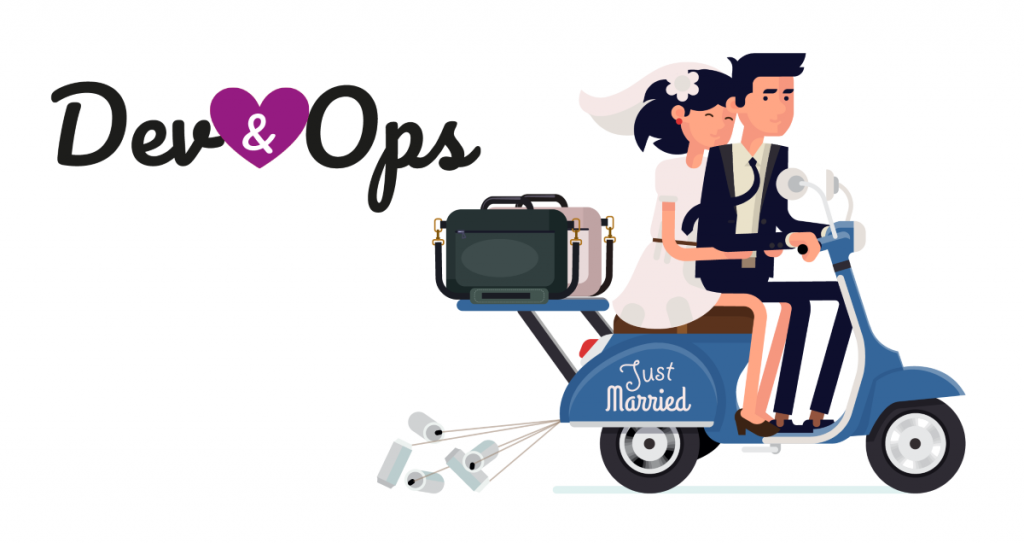 The dream of executives and entrepreneurs everywhere is to continuously roll out cool new software features to their customers and watch their revenues explode as their software spreads around the world like wildfire. In other words, the realization of Concept to Customer without interruptions – all within hours or days, as opposed to weeks or months. Another dream is to go on a relaxing vacation and actually relax – knowing that your servers and your team back home have automated the entire development and release process to run like clockwork.
The nightmare? Well, imagine that someone on your team forgets to update one of your deployment servers with the correct version of software. You lose $400 million in 45 minutes and your company goes out of business. Don’t laugh. It happened to Knight Capital in 2012. Talk about DevOops.
All of which gives us the short answer to the question posed in the headline: why is DevOps a must for every company in 2019? Because it can help you realize the dream and avoid the nightmare. A longer answer requires us to step back and take a quick look at the history of DevOps to explain exactly what it is and why it has become so crucial.

In 2007, a technically-oriented IT consultant in Belgium was struggling with a data center migration project and, in particular, the chasm between the Development (Dev) and Operations (Ops) teams. There was a huge disconnect between these two teams and it was causing him all sorts of problems.
So, he connected with other technically-oriented IT people around the world to discuss this issue and hopefully find a solution. Agile was already popular at this time, but deploying it was something quite new so they started to explore the notion of Agile Infrastructure, deploying Agile software, and the fast-rising methodology of Continuous Integration (CI).
A few years and a bunch of tweets later and the first DevOpsDays conference was held in Ghent, Belgium in October 2009. It was a large gathering of all these technically-oriented people with the purpose of investigating and discussing the marriage of Dev and Ops, and the convergence of Agile, CI, Continuous Delivery (CD) and automation, as well as a wide variety of emerging software tools to streamline DevOps processes (Github, Jenkins, and later Kubernetes, Puppet, Chef and New Relic). They dropped the word ‘Days’ from the conference title shortly thereafter – and DevOps was born.
In 2011, The Gartner Group announced that 20% of Global 2000 companies would adopt DevOps as a core strategy. DevOps was headed for the mainstream.

Today, 17% of companies have fully embraced DevOps, while 24% have a few teams that are fully immersed in DevOps, as shown below. Another 25% have just started their DevOps journey. 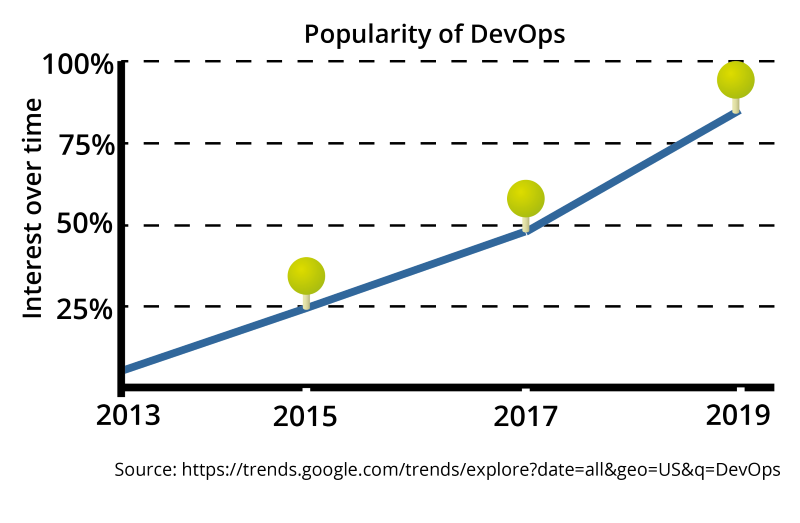 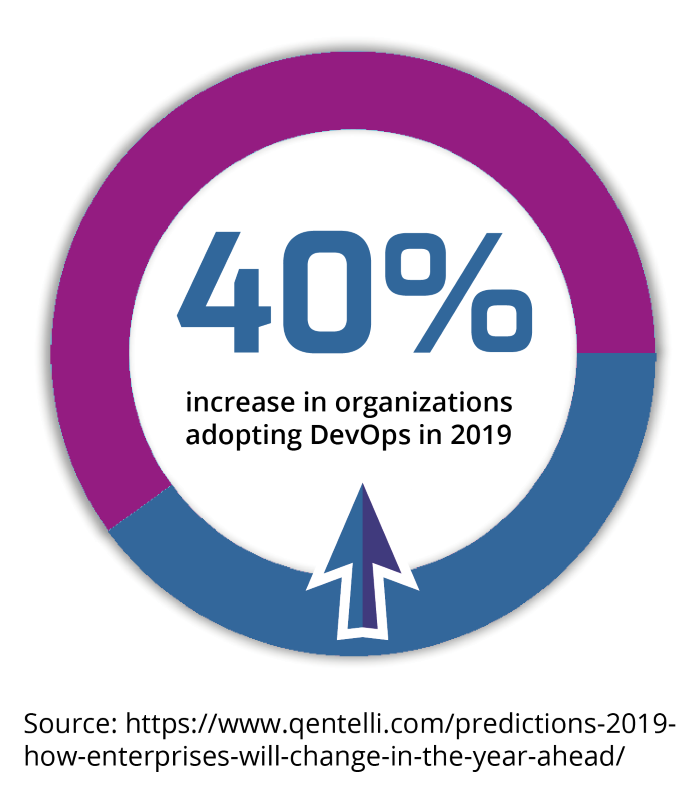 Something is happening here, but what it is ain’t exactly clear – as the song goes. Let’s try to find some clarity…

Of course, wise technology executives are typically skeptical of trends. Trends don’t last. But DevOps is not just a trend. It is here to stay. Why? One of the inventors of the notion of DevOps hints at why when he calls it a movement “for practitioners, by practitioners”, which is just a polite way of saying it comes from people who actually know what they are talking about. Recall the history: technically-oriented people invented it and Gartner sanctioned it. Not the other way around.
Grassroots, ground-level, organic. Call it what you want. Experience is the greatest teacher and DevOps is an ‘’experienced-based movement’’. It doesn’t come from Academia. It doesn’t come from the Sales people. It doesn’t come from Executives. It doesn’t come from Google. It’s from people on the ground who endure the pain points on a daily basis.

What Exactly is DevOps?

DevOps is a culture and a set of software tools to support this culture, which together solve the most critical issues faced by people who develop and release software, which have plagued the business from the inception of the industry itself. Wow, that’s wordy but useful if you need a quotation. Put more simply: DevOps enables that ever-elusive ideal of Concept to Customer in hours or days, rather than weeks or months.
The tools are well-known and well-documented, and are already sweeping the world. You can’t walk into a development shop these days and not find Github and Kubernetes, if not Puppet and Chef. More interesting is the cultural aspect. The simple fact is that Dev and Ops are simply not happily married in most technology companies. Quite the opposite.
Why? To generalize somewhat, Development people are typically very different from Operations people. Developers tend to be Creators. Operations people tend to be Executers. Sure, it’s a stereotype and most stereotypes are false, but it underlines a critical aspect of creating software. A wide variety of personalities are required to get software out the door. Some people have to create the software. They worship creativity and cool new features. Some people have to roll it out and support it in the live production environment. They worship stability. DevOps embraces a culture where the distinctions are minimized and the objectives are unified in a culture where software is created iteratively in small chunks and continuously developed, integrated and released. Fail fast! Succeed even faster!
The advent of Agile was a first step in this direction but it always felt incomplete. If Concept to Customer is critical then Agile is really only half the picture. It made us all sprint – but to where? DevOps fills the void. It represents a convergence of all these trends and tools towards a goal that executives appreciate: adding cool new features to the software faster, which equals more revenue for the company faster. So DevOps makes both the technology teams and the executive suite happy. Another key to its rising popularity. But why a global movement?

But is culture really so critical? Yes, it’s everything. Ten motivated people in a room can achieve anything. In the early days of software, before they called it agile, a bunch of people would sit in a room and collaboratively create software from Concept to the Customer. There were no titles. There were no divisions. There was just: get great software out to the customer. Concept to Customer wasn’t just a cool talking point. It was the everyday reality.
Then things got complicated. Ten employees became 200. Management divided Development from Operations and moved them to a new floor or a new building. Cracks in the relationship appeared. Divorce was discussed.
This, more than anything else, seems to be the reason that DevOps is sweeping the world in 2019 and it is no longer a ‘nice to have’ but a ‘must have’: technology companies who unite Development and Operations in order to deliver cool new features to customers within hours or days will win out every time.

This is the first in a series of posts from atroo in which we want to shed some light on DevOps and why it is crucial for every company to employ DevOps from both a cultural and technical perspective. At atroo, we embrace the culture of DevOps to deliver better software faster. If you have questions, or if you want to learn more about how atroo can help you implement DevOps at your company, please don’t hesitate to contact us or follow us on LinkedIn and Xing for new content.

Image Credits: All images from Shutterstock from these artists: Mascha Tace, PCH.Vector, Kanate and sidmay.